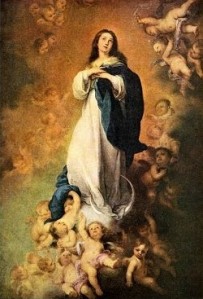 A few weeks back, I was looking at some old pictures from when I was in the college seminary – young(er), full of innocent and naïve energy, able to beat out defending opponents as a forward in soccer, able to root on Albert Pujols as my favorite Cardinals player, and I got to thinking, “Wow!  Sometimes I wish things were like that still!”  That’s what happens when we look at old pictures sometimes.  We get a sense of nostalgia going back and looking at those times past when life was simpler, happier.  Sometimes, it can even be consoling to look back at these photos during our rough times.  They remind us of the way things were, the way that we might want them to be.  And we nostalgically think that if we just did things a little differently, a little more like the way things were in those photos, we could be happier.

But then came the Fall.  Sin entered the world, along with blame, conflict, resentment, division.  The world first knew temptation, when people did what they knew they shouldn’t, what they knew they didn’t want to do.  When Adam and Eve looked at each other, where once there was love and innocence, now there was shame and embarrassment.  And so they hid from God, afraid, alone, and ashamed.

But she’s also a look forward, a promise.  That look back isn’t nostalgic, a vain attempt to relive the past.  But it’s a promise from God that he will restore us.  Through Mary’s Immaculate Conception, God says to us, “Hey, remember the way things were before any of this bad stuff happened?  I will return that to you!  I will raise you up to live it again!”

So how do we get there?  By following Mary’s example, being open to God’s will in our lives.  Imagine the fear, uncertainty, and maybe even disappointment of Mary at the Annunciation, as we hear in the Gospel.  She had no husband, she had no livelihood, and probably being so young, she might not have been able to support a child.  Imagine her disappointment perhaps, that her life wouldn’t be as simple as she had hoped.  In our lives, that fear will be there, that confusion and uncertainty will be there at times.  Maybe doing God’s will might make us uncomfortable.  Maybe following what the Lord has in mind means our lives won’t work out exactly as we had planned.  But that openness allows the Lord to bring forth fruit in our lives, just as we see in this simple woman becoming the Mother of the Redeemer, the fairest member of our race.

So as we celebrate this Solemnity of the Immaculate Conception, let us look at Mary as that snapshot.  A snapshot of the way that things used to be, but also the promise of what is to come.  As Blessed Pope Pius IX wrote as he declared this feast, “Let [us] continue to venerate, invoke and pray to the most Blessed Virgin Mary, Mother of God, conceived without original sin. Let [us] fly with utter confidence to this most sweet Mother of mercy and grace in all dangers, difficulties, needs, doubts and fears. Under her guidance, under her patronage, under her kindness and protection, nothing is to be feared; nothing is hopeless.”

(Quote from Blessed Pope Pius IX’s Apostolic Constitution Ineffabilis Deus, in which he declared the Immaculate Conception as a point of dogma.)