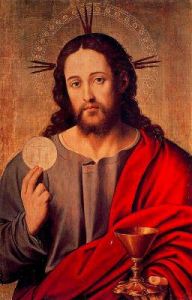 Say the magic word!  Of course, every child knows what the magic words are to get a cookie or a favor or pretty much anything else – “please” and “thank you”.  These are the words that do everything, the most important words for opening doors and new opportunities.  Actually in magic tricks, you’ll hear the magic words as being something like “Hocus Pocus”!  But did you know that this phrase is actually a mockery of Catholicism, especially of the Eucharist?

“Hocus Pocus” is a mockery of the Latin words used at Mass, in which the priest says “Hoc est enim corpus meum,” meaning “This is my body.”  This is a criticism of the Mass by people who think that our celebration of the Mass is magical, comparing the words of Jesus to words that might do the impossible.  In their mind, Jesus saying that bread becomes his body is about the same as a magician pulling a rabbit out of a hat!

To put it bluntly, the words that we speak at Mass are not magic words – they are the words of Jesus Christ, the Son of God.  These particular words spoken by Christ, and the narrative that is formed around them, is called the Institution Narrative.  If you listen, the Eucharistic Prayer changes gears from being a prayer to the Father to recounting the events of the Last Supper, when Jesus instituted the Eucharist.  The words of institution, the words Christ spoke to his disciples saying “This is my body,” and “This is my blood,” are the Words of Institution, and they are the holiest and most important part of the Mass.

So why are they so important, if they’re just words?  We might have a tendency to think of them like magic words.  But these aren’t our words designed to manipulate God into doing something for us.  They are the words of Christ.  Are they just words?  Were they just words that God spoke to create the heavens and the earth?  Were they just words that Jesus spoke to heal people of their sickness?  Very simply, God’s word does what he says it does.  So if God can speak and create trees and oceans and clouds and breakfast cereals out of nothing, I’m pretty sure he can change bread and wine into his body and blood.

Just as Jesus spoke those words at the Last Supper, he speaks them again at every Mass through the priest to do the same thing.  Because of the power of these words, a priest can’t change them.  Priests are not really supposed to change any wording of the Mass for their own purposes anyway, but the Words of Institution are non-negotiables.  In fact, if a priest just made up his own words here (“…and gave it to his disciples, saying, ‘I LOVE YOU GUYS!  YOU’RE AMAZING!’”) they would be invalid.  And of course, that really stinks for everyone going to Mass, because they have to stick around and go to Mass again for their Sunday obligation, listening to the same boring homily.

As I mentioned, some of these changes are pretty significant, so next time, we’ll pick up these important words again, and explain what they’re about!

One thought on “The Roman Missal: The Institution Narrative (Part I)”