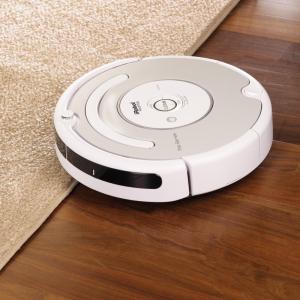 One of my personal dreams is to one day have one of those automatic Roomba vacuum cleaner robots.  I found one on the internet the other, and listen to this: it removes up to 98% of dirt, dust, and debris (Debris?  What, are you shooting off fireworks in your bedroom or something?).  It is self-adjusting, so it can navigate around rooms, under furniture, and around walls, even into corners.  It actually uses optical and acoustic sensors to identify dirtier areas so it can spend more time cleaning them.  It has an anti-fringe setting, so it avoids cords, carpet fringes, and tassles, so it won’t destroy my cinctures if I leave them lying around.  And then it even goes back to it’s charging station when it needs to rest.  What a great machine, right?  You just set it up, and let it go.  It doesn’t whine or complain, it doesn’t make you self-conscious when it’s cleaning in your room, and the best part – you don’t have to clean anything!  You set it up, set it to the correct settings, and it does exactly what you tell it just because you said so!

I wonder if there is a part of us that sees discipleship in the same way.  You know, Jesus gives us his teachings, and then we have to go out, do the stuff, and finish the job.  Discipleship, or friendship with Jesus becomes something robotic.  We follow simply because it’s what we’re supposed to do.  But Jesus doesn’t want robots, not even Roomba vacuum robots – he wants friends.

Why do so many of the disciples in the Gospel decide to stop following Jesus after his explanation of the Eucharist that we’ve been hearing these past few weeks – the Bread of Life discourse from John, Chapter 6?  Well, this touches on one of the greatest mysteries of our existence – the mystery of human freedom.  Somewhere, somehow, God put into the deepest recesses of our hearts a freedom to accept or reject faith in him.  Faith is a gift, and like any gift, it can be accepted or rejected.  We can’t manufacture faith in God, but it’s a choice that depends on us, just as it did for Jesus’ disciples – “Do you also want to leave?”  We know that God is the creator of heaven and earth, the Lord of life and history, but he refuses to impose himself on our hearts.

Try to imagine how painful that must be for God.  Think back to your earliest days of high school, when you had that awkward moment of trying to make new friends.  You extend yourself, make yourself vulnerable, and you have no control over whether you’re accepted or rejected.  Now think of Jesus.  Picture his expression as he spoke those words to his apostles: “Do you also want to leave?”  Imagine his eyes as they looked into the faces of those twelve.  He had handpicked them – they were his companions and his friends, and he cared deeply for them.  He had opened his heart to them as he did the other followers in speaking the truth about being the Bread of Life, and as others had said, “No thanks,” giving up on him, he looked to his twelve closest friends.  Would they abandon him too?  And today, he looks at each of us the same way today.  How incredible!  He is humbling himself, waiting to see what our response is.  The God of the universe is powerless in the face of our freedom.  And he doesn’t want heartless slaves or mindless robots that simply follow directions – he wants friends.

Brothers and sisters, this happens at every Mass.  We have an opportunity to respond in any way we choose to that question, “Do you also want to leave.”  How do we answer?  Here’s a couple answers.  “Depends, how long are you going to be?”  “Um, let me check my calendar to see if I can make it that day.”  “Meh, I guess I’ll stay, as long as you promise it will be interesting or entertaining.”  “I don’t know, who else is going to be there?”  But what about this one: “Lord, to whom shall we go?  You have the words of eternal life.”

It’s so easy to see Mass as just something that we have to do.  It becomes something to get over with, something to punch the card and sit it out.  I hate to even bring this up, because it can be very uncomfortable, but it becomes even normal to arrive late or leave early for Mass.  I certainly understand that all of us are busy people with lots of things to do and places to go.  There are lots of activities and responsibilities to attend to, and I for one am happy you’re here and genuinely try to assume that people have emergencies to attend to when this happens.  But if that’s something you struggle with, I would challenge you to maybe examine that in your life.  I’m not asking you to change for me, or because it’s something that is expected of us by the laws of the parish or the Church.  I would invite you to think about it, and any struggles we have in our practice of faith, as a response to Christ.  Mass isn’t something that we do simply because we’re supposed to.  It’s an encounter with Jesus, who makes himself vulnerable to you, and it’s our response of friendship back to him.

So here’s a question for us all to ponder today: “How would I characterize my relationship with God?”  Or better yet, “How would a casual observer characterize my relationship with God?”  Is my relationship something that is mechanical, robotic, or routine?  Or is it a real friendship – a living, ongoing, dynamic, and personal exchange, a life characterized by personal and authentic prayer?  Don’t worry, God won’t reject you if you’ve fallen into routine, and Lord knows we’ve all been there at one point or another.  It’s not as though God gets pouty if we’re neglecting him in some way or another – he’s far too generous for that.  But He would certainly wish that it could be a friendship, both for Him and for you.

Today, we sit in the Lord’s presence, as he unfolds his teaching and his friendship to us in his Word and in his Body and Blood.  He presents it before our free will to embrace or reject it, asking us the same question he asked the Twelve: “Do you also want to leave?”  Let us, who follow Christ as his Church, respond by giving him our who hearts, saying together with St. Peter, “Lord, to whom shall we go?  You have the words of everlasting life.”