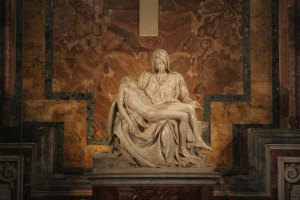 A few years ago, a few friends and I had the opportunity to go to Rome, and on one particular afternoon, we visited St. Peters Basilica.  And as soon as we walked inside and along the route, I was struck with the amazing piece of artwork that was before me in Michelangelo’s famous Pietá.  It’s quite a piece of artwork, and it stands out quite a bit.  It’s obviously painful, but at the same time, comforting.  If you walk by too quickly, however, you might get the impression that it’s too objective, too passive, to statuesque to have much meaning.  Even here in our own church, as we look around, all the ornamentation and decorations have gone away, and the only image that we have of the Passion that we have in our midst is this image of the Pietá.  Once again, if we’re just passing it quickly on the way back from receiving Communion, it might not seem to have much meaning.  But having it here, it got me to thinking what Good Friday was like through the eyes of our Blessed Mother. 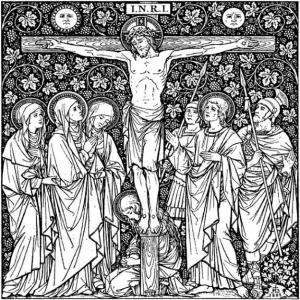 Sometimes we ourselves can think of the Passion like a statue and passively look at it without going too deep into the meaning.  Maybe to make it real for us, we should consider what Mary actually felt, what was going through her mind – the memories of him growing up, the secret memories that only she had of him, paired with the agony of the images before her.  Perhaps she had memories of his birth, and the tears of hunger or uncomfort or whatever babies cry about (only moms are good at picking those out for sure) rolling down his cheeks as he lay in the manger – only to have that image paired with the tears and blood dripping down his face.  Perhaps she remembered him getting left behind in the Temple and the feelings of helplessness of not knowing where he was.  And that struck all too true as she felt the helplessness of watching him taken away from her as he was condemned by Pontius Pilate.  Perhaps she remembered him running through the streets of Nazareth with his friends, falling and skinning his knee as every kid in the universe does – paired with the image of him falling time after time under the weight of the Cross and under the blows and spit of passersby.  Perhaps she remembered making his clothes, washing them, drying them – only to see them savagely ripped from his broken body because they couldn’t fit over his head with the crown of thorns there.  Perhaps she remembered pouring him milk or water, perhaps telling him not to spill it on his clean shirt, or to keep his elbows off the table, only to find herself begging a soldier to simply give him a taste of wine and gall as he hung on the cross, helpless to reach for it.  Perhaps she remembered listening with a motherly pride as he spoke to the crowds from the mountain, teaching them the Beatitudes and that theirs was the kingdom of Heaven.  And yet she stood there watching him turn to Dismas, the repentant thief, telling him that today, he would be with him in paradise.  Almost assuredly, she remembered the first time he had called her “mother”, and imagine her pain at seeing him turn to her at the point of death and say, “Woman, behold your son.  Behold your mother.”

I think there is a part of us that desires to gravitate toward those fond and happy memories.  We like hearing about the tales of comfort and forgiveness and healing that Jesus gives to the poor and marginalized.  We might be touched by the simple acts of servitude, like the washing of the feet that we heard about last night.  We love hearing the beatitudes, and that the Law of God is about humility and love.  So naturally, there’s a force in us that wants to keep that in the forefront of our minds, and be repulsed by the agony and suffering that we witness today.  How natural would it have been for Mary to walk away, not wanting to see her Son like that, to hold onto the memories of him that were filled with joy?  How natural would it be for any of us to do that?  But she doesn’t.  She keeps her station at the foot of the cross until the end.  And it’s because it’s only the cross that fulfills the rest of those memories, that makes the rest of Jesus’ life make sense.  All those other happy memories were part of a quest to teach his mother and us about happiness.

The most vivid memory that I have of Good Friday is of spending it with my grandmother at St. John’s Hospital.  There was nothing sentimental about it – everything was bare and sterile in the hospital chapel – as you’d expect in a hospital.  There were only about 5 other families besides us, each with someone attached to some form of medical device, each sort of unkempt and with semi-ruffled hair, each burdened by the exhaustion of worry and concern for their loved one.  But it was then that I was able to really see the meaning of Good Friday through those people and through my grandmother.

St. Thomas Aquinas wrote that if we really want to be happy, we should despise what Jesus despised on the Cross, and love what Jesus loved on the Cross.  What did he despise?  Well, look at the four things in which we usually seek comfort and happiness.  Wealth?  He’s entirely stripped of it.  Pleasure?  He is at the limit of physical and psychological suffering.  Power?  He has none; he can’t even move.  Honor?  They are mocking him as he’s publically displayed.  He’s detached from all these things.  So what is it that Jesus loved on the Cross?  Jesus’ only desire was to do the will of his Father.  He was hungering and thirsting for righteousness, and in doing so, became the ultimate peacemaker.  It’s strange to put it like this, but if Aquinas is right, that terrible image that I described earlier is the image of a happy man.  When we’re able to flip around our perceptions and our desires, when we’re able to embrace both the comfortable and agonizing parts of Jesus’ life and ours, it’s when we are able to see that this is an image of freedom.  This is a picture of joy.  That’s why we call today Good Friday.  It’s a paradox, a contradiction that gets to the heart of our faith.

Maybe that’s why the image of the Pietá was the way that it was.  As much as holding the body of her son was a dagger to her heart, it was also an olive branch of hope.  As much as it paralyzed her with grief, it was also a gift of true freedom.  As much as his broken body was the product of hatred, it was the perfect symbol and gift of love.  The same is true for us today.  So as we turn to the Lord now and receive him in the Eucharist, that same gift of his body that he gave his mother, let us offer him our hearts in thanksgiving for all he has given us on this holy day.