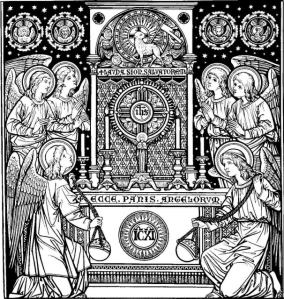 So a funny thing happened the other day.  I was working on this homily, and for some unknown reason, I decided to check my e-mail.  I saw one from Zenit, which is the Vatican news agency, which had a homily written by Pope Francis.  So I’m reading through this homily, when I have the sudden realization that the diocese of Rome celebrates today’s feast, Corpus Christi, on the Thursday following Trinity Sunday – which was last Sunday.  So that means that the homily I was reading was actually for Corpus Christi!  So I did my happy dance and proceeded to copy it down and read it to you today.  Not really, but Pope Francis brought up three words that guided his homily, and those are the three that I will allow myself to be guided by today: discipleship, communion, and sharing.  There, now you have a checklist to follow so you know how soon I’ll be finished.

The first theme is discipleship.  And if we think about the miracle in our Gospel today, maybe we should ask first, who is it that he’s giving this miracle to?   He’s giving it to the multitude, to the thousands who had been following him.  These aren’t like Cardinal fans who packed everything in their cars and drove 4 hours to watch the Cards play the Royals in Kansas City.  These are disciples.  They have given their entire lives over to Jesus – all they had was what they had on them.  They were totally dependent on Christ, all because they wanted to listen to what he had to say.  Today, we are the crowds following Jesus.  We come here to hear his Word and to receive his nourishment at the altar.  And I think the question we can ask ourselves today is “How do I follow Christ?”  What have I given up to follow him.  Obviously part of that answer is your time, which is why you’re here!  But what about when that time isn’t as convenient?  Or what about when it’s not something that we really want to give up?  What is Christ still calling me to give of myself to follow him.  Ok, so now I really will steal from Pope Francis.  He said the other day that “Jesus speaks in silence in the mystery of the Eucharsit, and each time reminds us that following him means coming out of ourselves and making our life not our own, but a gift to him and to others.

The Eucharist has so many different names that we use to refer to it.  Obviously one of them is the “Eucharist”, meaning that action of thanksgiving to God.  But there’s also “The Lord’s Supper,” “the Breaking of the Bread,” “the Holy Sacrifice of the Mass,” and in the eastern churches, it is called the “Holy and Divine Liturgy”.  Probably one of the most appropriate names for today is “Holy Communion.”  Think back to the miracle of the feeding of the multitude.  Whenever Jesus performs miracles, he’s doing it to solve a problem or fix something.  A person is possessed, so he exorcises them.  A person is blind, so he heals them.  In this case, the problem isn’t a personal thing, it’s a multitude – they are hungry!  What’s the disciples’ solution?  Dismiss them!  Everyone for himself!  Let them handle it on their own!  How often is that our solution as well, that we cast people aside to let them solve their own problems.  But what is Jesus’ solution?  He tells them to bring what they have, and uses it to provide for all – both their physical hunger and their inner longing for fulfillment.  All of them are satisfied.

That is communion.  Communion isn’t our coming together for one idea or purpose.  With all the storms Friday, there was a lot of damage, but there was also an outpouring of help!  People were helping others out so that things could get back on track, so that traffic could get moving, and so that things would be the way that they were before.  That’s great!  That’s real service!  That’s solidarity!  But it’s not necessarily communion.  Solidarity isn’t communion until you add love in the mix.  Communion isn’t the coming together of people around an idea, it’s coming together around a person, Jesus Christ, who is love.

One of the greatest things the Eucharist can teach us is generosity.  It teaches us to give freely.  Think about the miracle in the Gospel.  When all was said and done, the disciples didn’t send everyone a bill!  The Eucharist is a gift.  It is the gift of the disciples as they pooled what little they had, which was clearly insufficient.  But it is the gift of Christ as well, as he consecrated the bread and fish, as few as they were, to make them sufficient and satisfying to the crowd.  Even today, the Eucharist is our gift, as we present bread and wine and our prayers, but it is Christ’s gift above all, as he consecrates them to give us life, peace, and satisfaction.

The Eucharist is an invitation to give as well.  In our first reading, we have this story of Abraham and Melchizedek.  Tradition has interpreted Melchizedek as a prefigurement of Jesus, as he brings bread and wine.  What is Abraham’s response?  Prior to the reading, he had just conquered an army from Sodom, recovered all his stolen possessions, and rescued his cousin.  He had everything back to what was comfortable for him.  And what did he do?  He gave a tenth of it to this unknown priest!  Not because he liked Melchizedek or because he owed it to him, but out of gratitude and generosity of God.  For me, it’s tough to talk about tithing from the pulpit.  I feel like I’m just asking for money for ourselves so that we can pay our staff, keep the church pretty, and keep the lights on.  It doesn’t seem fair.  It’s dependent on pure generosity.  And in our contemporary culture, we see giving in a commercial way – I give something, and you give me something back.  But the reality is, tithing isn’t filling out your envelopes or dropping in the basket because we owe anything.  It really is about pure generosity, because that’s what communion is.  Pope Francis said, “In the Eucharist, the Lord makes us travel his path – that of service, of sharing, of gift, and what little we have, what little we are, if shared, becomes wealth, because the power of God, which is that of love, descends into our poverty to transform it.

Brothers and sisters, today, the Eucharist calls us to think about discipleship, communion, and generosity.  Let us pray for the grace to give to Christ more freely, to follow Christ more closely, and to live in Christ more deeply.