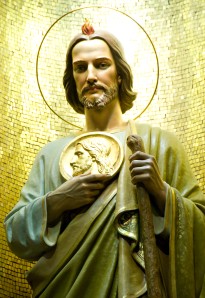 Today’s saint is the feast-day buddy of St. Simon from last week. He’s called “Jude” in the Gospel of Luke and Acts of the Apostles, but “Thaddeus” in Matthew and Mark. Thus, lots of people in the Church simply refer to him as “Jude Thaddeus” to cover all their bases. He was probably actually “Judas”, but that was shortened in order to avoid confusion with another Judas who you might have heard of. Tradition holds that he was the son of Mary and Clopas, and so was the cousin of the Blessed Virgin Mary. Other than his name, there is no direct reference to him anywhere in the Gospels.

We pick up St. Jude’s story after the Resurrection…or we would, if there were any reliable texts. Tradition holds that St. Jude went to Judea, Samaria, Syria, and Mesopotamia. Supposedly, he and St. Bartholomew were the first to bring Christianity to Armenia on their missionary journeys, and so are venerated as patron saints of the Armenian Church to this day. In fact, there is a monastery in northern Iran (formerly part of Armenia) where a church was present even as early as 68 AD!

St. Jude and his partner St. Simon are spoken of in the famous story, the Golden Legend. The legend speaks of the apostles’ martyrdom by a group of enchanters/magicians who belonged to the court of King Abgarus of Edessa (in Armenia). St. Jude had been preaching to the king, and after his conversion, the magicians had been sent away, so in their anger and jealousy, they attacked and killed the two apostles. In iconography, St. Jude is sometimes depicted holding an axe to symbolize the way he was martyred. Today, his relics rest in St. Peter’s Basilica alongside his partner, St. Simon.

St. Jude has become one of the most popular Catholic devotions. He is usually pictured with a small flame atop his head, symbolizing the presence of the Holy Spirit, and wearing a pendant of the face of Christ, representing his missionary work of holding Christ in his heart and bearing him to others.

Somehow, the tradition developed of him being the patron saint of hopeless causes, although to be honest, I’m not sure why. There have certainly been numerous powerful miracles through his intercession, even from the early days of the Church. One example was the life of famous 40’s and 50’s comedian Danny Thomas. Early on in his career, he was very near starvation, but was so moved by a homily on Sunday that he gave away all he had in the collection basket – except he didn’t realize it! When he discovered that he had nothing left, he prayed that St. Jude would protect him and help him be successful, and sure enough, it happened! Danny Thomas became extremely successful and pledged to build a hospital in St. Jude’s honor, which now stands in Memphis, Tennessee.

It’s worth reminding ourselves that even when things fall apart around us, when we have a strong faith, nothing is impossible for God. St. Jude surely learned that in his time following Jesus, and he lived it out in his preaching and ultimately sacrifice. Let’s pray that we would have hope, and that through St. Jude’s intercession, God would accomplish the impossible through us!

By the way, if you’re interested in donating to St. Jude Hospital, you can do so here!

One thought on “St. Jude: More Than Just a Hospital Charity”