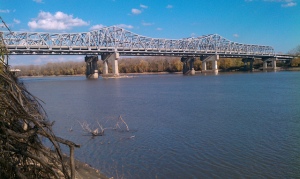 Out in St. Peters, Missouri, we’re pretty familiar with the Missouri River, although usually from above as we sit in traffic on the Blanchette Bridge.  What’s interesting about the Missouri River is that although the portion that we see is so large, it has it’s origin at Brower’s Spring, all the way up in the mountains of Montana.  The massive river that we see comes from something unseen to us, but inexhaustible!  That spring is a powerful force!

The image of a spring is a great one for our faith.  We’ve been looking at Eucharistic Prayer II, and one of the very first lines is, “You are indeed Holy, O Lord, the fount of all holiness.”  This reference to a fount is found throughout scripture, and should make us think of that powerful spring.  We’re invited to envision God’s grace like a spring or fountain, gushing forth and giving us power, life, and refreshment.

Sacrosactum Concilium, the document on the Sacred Liturgy written at the Second Vatican Council, talks about it this way: “The liturgy is the summit toward which the activity of the Church is directed, and at the same time, it is the font from which all her power flows.” (10)  The whole purpose of what we’re doing on Sunday – between the singing, the spoken responses, the colorful vestments, the boring homily, and of course, the Eucharist – is to bring us closer to Christ.  Even after we walk out those squeaky doors, our works of charity for others are ultimately aimed to bring us back to the altar, to that most intimate moment of union with God!

But even as all that is going on, Christ pours out his grace on us, like an unending, inexhaustible fountain, empowering us to grow in our relationship with him, and to be better disciples of him by the things we do for others.  Like that fount hidden away in the Montana mountains that gives way to a powerful river, God’s unseen grace pours into us, giving us the ability to do the most powerful thing on earth – give of ourselves.

The fount of holiness is a neat image, and one that can be powerful for us, especially when we feel weak.  So the next time you pray the Eucharistic Prayer, try to make that effort to actively be open to God’s grace, letting the roaring waters of that fount of holiness rush over you!

One thought on “Eucharistic Prayer II: “The Fount of All Holiness””